One of our loyal clients travelled to the French Alps in August with her family on an unforgettable summer holiday. They stayed for two weeks - their first in Samoëns while the second was in Chatel. Here is the first instalment all about their week in Samoëns!

Having had a wonderful fortnight staying at La Reine des Pres in Samoëns last summer, we chose to return there for the first week of our holiday this year, crossing the channel by ferry and stopping for a night in Dijon en route.

When we reached La Reine des Pres we were given a warm welcome by Bernard, the Manager, and we were pleased to be allocated an apartment in our favourite part of the residence. Over the course of the week we loved having meals out on the balcony watching the paragliders and taking in the distant mountain view and beautiful sunsets. We also made the most of the swimming pool and relaxation area at La Reine des Prés.

La Reine des Prés is a short walk from the park where the activities on offer included a tree top adventure trail, outdoor swimming, pony riding and diving from a high ledge onto an inflatable pillow. However, the activity that appealed most to our children was playing an alternative version of golf, which involved driving golf balls towards hoops in the lake. As soon as we realised the children’s recently honed golfing skills were far superior to our own, it was time to move on to the next activity.

We enjoyed a family ride on a pedal-powered red chariot. We did our best to steer the slightly precarious contraption along the road, over a speed bump and round a roundabout. At this point we realised we lacked acceleration and might be safest travelling off road on the lakeside path instead!

One of the highlights of the week for our son was an exciting afternoon spent white water rafting on the River Giffre. The rafting experience started in the pretty village of Sixt Fer à Cheval. The journey then involved travelling through a gorge and stopping for a swim in the river. For those feeling brave there was the option to dive from a bridge into the river as it passed through the gorge. The scenic and exhilarating trip ended back in Samoëns.

There is a relaxed and friendly atmosphere in the village of Samoëns during the summer months. We enjoyed a couple of delicious meals at the “Fandioleuse” crêperie which is located in a historic and atmospheric building. We chose from an extensive menu of savoury and sweet crêpes, all with exciting names, written in the language of the stonemasons. The village put on a weekly programme of entertainment and we enjoyed having a meal at a café in the square one evening, whilst listening to “Music from around the world”.

After completely unwinding for the first few days, we felt ready for something more energetic and started planning a few walks. The first walk started at Chalet du Lignon, a short drive from Sixt Fer à Cheval. The sign at the start of the walk stated that it was two and a half hours to Refuge de Sales and we soon realised that the walk was almost entirely uphill.

Fortunately we had beautiful scenery to take in and there were some impressive waterfalls along the way. At one point the path narrowed round a cliff edge and we were pleased to find a handrail to cling on to. We finally made it to Refuge de Sales and were relieved to find they were still serving lunch.  As the location is so remote, the food has to be delivered by helicopter. On the way back we heard a distinctive animal cry which turned out to be the call of the marmot. We were very excited to see a second marmot on our way back down the mountain.

The next day’s walk turned out to be even more memorable. We drove a few miles out of Samoëns to the start of a circular walk taking in Refuge de la Golèse and Refuge de Bostan. We enjoyed walking in bright sunshine through Alpine pastures dotted with wildflowers, to Refuge de la Golèse, where we had a delicious lunch on the outside terrace.

We then took the path above the refuge to the top of the ridge where we took in the stunning views towards the Grand Massif. There wasn’t a cloud in the sky and we enjoyed listening to cowbells tinkling in the distance as we followed the rocky path to Refuge de Bostan. We still had some way to go after that but the rest of the walk was downhill through a wood to the carpark.

We reached the car and, as I unlocked it, I saw a billy goat coming towards me. Detecting that “Billy” had a bit of a smell about him, I hastily dived into the front seat and shut the door. I was then horrified to look out and see my husband being biffed round the outside of the car by the cheeky goat.  As if this was not bad enough, “Billy” spied the open boot and jumped straight in. I turned round to see horned “Billy”, his eyes gleaming, peering over the middle seat looking as though he wanted to jump right over to the space between the children.

It occurred to us that our beloved family car might not be insured for damage to interiors by billy goats and we began to feel a sense of panic taking over. In desperation we tried to entice “Billy” out with one of our favourite “Lu” chocolate biscuits but he stubbornly refused to move. Eventually a passing local took “Billy” firmly out of the car. We could hardly wait to get back to Samoëns where we stopped at Sherpa for the largest pack of anti-bacterial wipes we could lay our hands on!

Our week in Samoëns was rounded off with a trip to our children’s favourite shop, “Bonbon”, for traditional pick and mix sweets, before heading to the crêperie with friends we had made at La Reine des Prés. 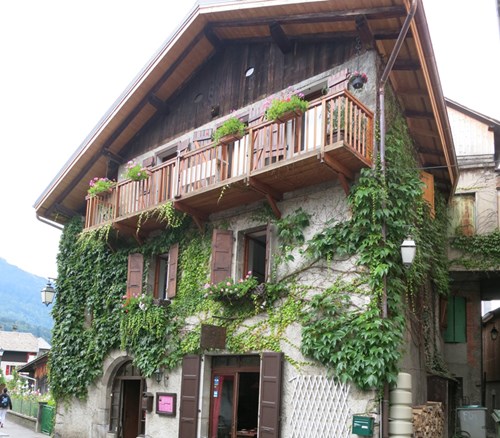 Where to next?
Part 2: Super Châtel | A-Z Guide of Summer Alpine Activities