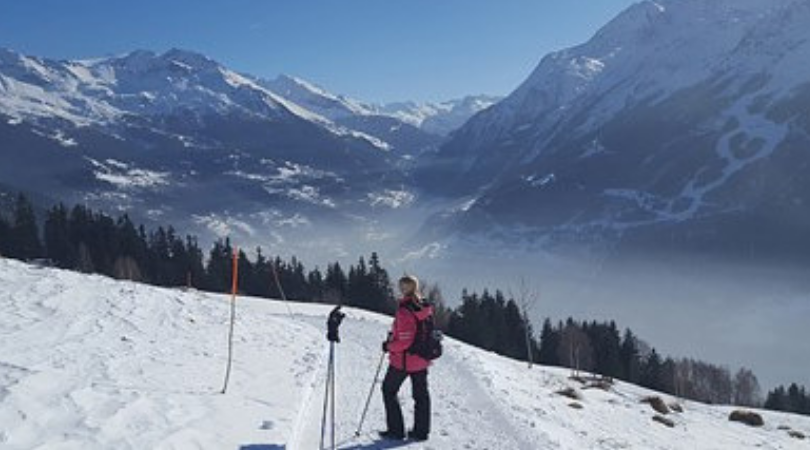 This was our second visit to La Rosière. Last time we arrived in a blizzard after a pretty hairy ride up the twisty road from Seez. This time glorious sunshine, and it stayed that way all week. Our apartment was in building 8 of the Balcons de La Rosière. Access to the residence, and this building in particular, is difficult unless you rent a parking space, as there is no outside parking nearby. Our apartment and balcony enjoyed glorious views up the valley over Sainte Foy towards Val d'Isere, with Les Arcs visible to the right. It deserves its reputation as the "balcony of the Tarentaise". The apartment was comfortable and reasonably well equipped!

You can't beat La Rosière on a still sunny day. The resort faces south and because it is over 1800m the sun shines on the village and the ski slopes all day. The snow was reasonably good this week, so we had two days of skiing and three snowshoe walks. Les Balcons is in Les Eucherts, a satellite village linked to the centre by a delightfully lit snow path which takes 20 minutes. But Les Eucherts is self-contained, with its own small shopping centre, bars, restaurants, ski school, nursery slopes, ice rink and lift. From the apartment you can ski straight to the Eucherts Express lift or the nursery slopes. For families with young children, access to the Piou Piou Club is very easy.

View of Les Eucherts' Front de Neige from the apartment

We did three walks described on maps from the Tourist Office. Firstly, along the path into the main village and took the Chemin de La Prairie des Neiges. This winds along the steep hillside below the village for about 2000m so you get uninterrupted views over the valley. Eventually, it leads back up into the village where you can take the Chemin d'Italie, which is actually the road through the little St Bernard Pass, closed in winter. This easy but busy walk of 1200m has spectacular views over Bourg St Maurice. Extra interest is added by watching skiers hurtle down the Ecudets black run which crosses the path....watch out! We saw an unaccompanied snowboard flying down at about 60mph! The path is closed beyond the Ecudets lift arrival due to avalanche risk.

The second and much tougher walk (4 hours there and back) is the Chemin des Militaires which goes straight up alongside the ski area to Le Roc Noire and then along the ridge to the Fort de la Redoute. It is a tough climb to Le Roc, then easier to the Fort, where there is a cafe. Although possible in snow boots, raquettes are definitely better.

Coffee on the way up to Le Roc Noir

However our favourite walk is Le Bout de la Route, which leads directly from Eucherts up a side valley to the bottom of the Fort lift. Despite the closeness of the ski area, this lovely 2.5 mile (700ft climb) path feels quite remote with the bonus of La Traversette restaurant to welcome you!

The skiing is easy and fun in La Rosière. We used all the blue runs in the three sectors, Eucherts, Fort and Rosière. They are all well linked and provided with mountain restaurants with sunny terraces. Our particular favourite runs were taking the Eucherts lift, then the Myrtilles piste to the Plan de la Repos restaurant, then using the Papillon back to Eucherts. Or bypassing the restaurant using the Perdrix from the lift top and joining the Papillon.

These routes are quieter and more interesting than the main motorways, the Gelinotte to Eucherts or the Tetras to Rosière centre. The Fort sector is perhaps the quietest, with two long blues Mouflon and Belette, but it is also the liaison route to La Thuile in Italy. The only downside to skiing here is that if it gets cold and windy, it can be pretty bleak at the top of the main runs, though far more sheltered lower down. But when the sun is shining and the snow is good, La Rosiere is unbeatable!

This blog was written by our client David.