Want to know what it's like to ski Val Cenis in France?

One of our loyal family clients shares their thoughts on their skiing holiday to Val Cenis Vanoise...

From the moment we first saw the snowy photos of Les Chalets de Flambeau on the Peak Retreats website we couldn't wait to stay there. Before long, we were on the phone with the reservations team booking accommodation in Val Cenis at Les Chalets de Flambeau for the summer and winter holidays. We chose Val Cenis for a family winter ski holiday as we thought it would have a good chance of reasonable snow cover in late March, given that the highest runs start at 2800m and the slopes are all north facing. We were also looking for a family orientated resort that would not be too crowded during school holidays. We set off early on the first day of our drive to Val Cenis. 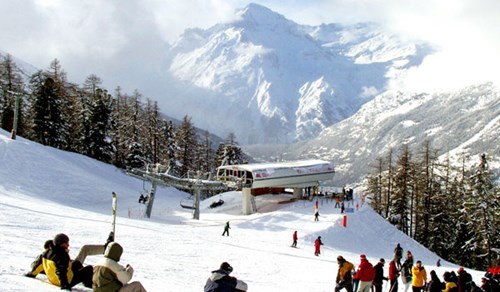 As we reached the Eurotunnel terminus at Folkestone, a few flakes of snow fell on the car and we could barely contain our excitement! Maybe the hastily purchased winter tyres would come in useful after all? We drove along the purple lane to the Eurotunnel FlexiPlus lounge where there was a good choice of hot drinks and you could pick up complimentary breakfast bags and newspapers. We waited for a few minutes at a traffic light for the next train to be ready for boarding and were soon driving onto the train for the short thirty five minute journey to Calais. The motorways in France were busy but there were no hold-ups and we reached our en-route hotel, Novotel in Beaune, in good time for supper. 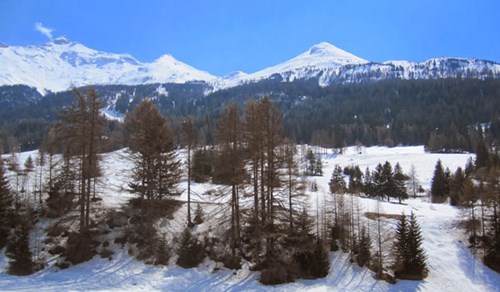 We didn’t encounter much traffic on the second day until the section of the motorway between Lyon and Chambery where there were a few Péage queues. Not the best time for us to accidentally post the Péage ticket in the credit card slot which swallowed it up! After a few moments of panic and with the sound of several cars behind us honking impatiently, we found the help button, the ticket was retrieved and we were on our way again. By the time we reached the Maurienne Valley, the motorway was a lot quieter as most of the other cars had headed off in the direction of the Tarentaise. We stocked up with food at Intermarché, which is just after the motorway exit at Modane, and from there it is an easy twenty-minute drive up to Val Cenis. 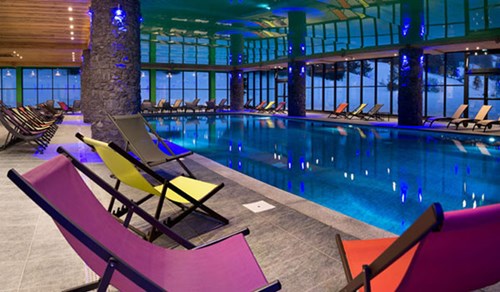 It is always a reassuring sight to reach one’s “ski to the door” residence and see that there really is snow to the door. Les Chalets de Flambeau is situated right at the foot of the slopes next to the Pré Novel chairlift and Val Cenis ski school meeting point. We were allocated a two-bedroom apartment in the main building, above reception and the leisure facilities. The apartment had a fantastic view of the mountains and lower ski runs. After a long journey, it was reassuring to find the apartment in an immaculate state. The apartments in Les Chalets de Flambeau are very comfortably furnished in warm colours and the master bedrooms and en suites are particularly well done. Les Chalets de Flambeau has a wonderful swimming pool which has a superb mountain view by day and glimmers with the colourful lighting in the evenings.

Where to next?
Part Two Of The Family Holiday | Discover Val Cenis

Client Review Driving to the Alps