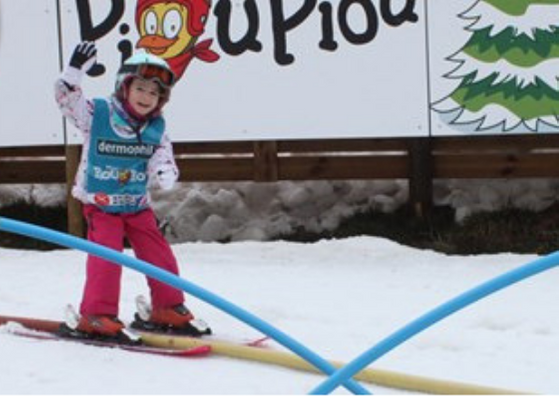 I love Sainte Foy. The peaceful slopes and short to non-existent queues are just a couple of the things that have had me going back time and time again. The first time I went there was in 2010 when I was 6 months pregnant and therefore couldn’t ski! This January I will be making my fifth trip!

My family usually drives to the Alps nowadays. It is a long journey during which the children watch endless DVDs, put stickers all over the car interior and play nonsensical versions of I-spy. Travelling by car can be frustrating if you hit traffic or encounter bad weather or both. However, the FlexiPlus pass from Peak Retreats means you don’t have to worry about hitting a time slot to cross the channel. That for me is one less thing to worry about – especially if (like last year) you realise at Watford Gap, the children’s ski jackets are still hanging on the bannister in your hallway, 100 miles away.

We take all our own kit or as much of it as we remember. There’s usually so much it fills our roof box and whilst you don’t need a car during a holiday in Sainte Foy, we regularly visit family in the area and so choose a longer journey over the ease of flying. We started driving to the Alps when my youngest was less than 6 months old and it felt like we were stopping every hour for a feed or a nappy change. Actually, we probably were; so as the kids get older, it feels like the journey passes more quickly.

On my first visit to Sainte Foy, I could not ski or snowboard. I was 6 months pregnant and could barely get my snowboots on without help. Sainte Foy has numerous walking paths/ snowshoeing routes and I explored a few of them, walking up through the woods to the mid station to join my friends for lunch and on another occasion, following the marked routes to the waterfall (Cascade) and antique drainage channels (Les Drains).

Sainte Foy is small which is a massive bonus because it makes everything convenient, especially when you have children, as I now do. Last April, we had fantastic views from our Peak Retreats apartment at Les Fermes de Sainte Foy but we were also spitting distance to the ski school drop off point. That tends to make things easier if you need to run back for a forgotten glove or lift pass! My eldest first learned to ski in Sainte Foy when she was 3 – and it is a great place for beginners. The nursery slope is right below Les Fermes and has a magic carpet to ride on up-hill. There is another nursery slope, which is shorter but a little steeper and is pretty much below Etoile des Cimes where we have chosen to stay this year. We enjoyed sledging there last year – up the magic carpet and off the opposite side to the skiers. Me and my daughters made ‘sledge sandwiches’ as I enjoy whizzing down a slope as much as they do!

Now both my children are of ski school age. M is 6 and T has just turned 4. They can’t yet manage a full day on the slopes as their morning lesson wears them out. We do manage a ‘family run’ after lessons a few times during the course of a week. Last year, we happily cruised the blue and green runs from the mid station at Sainte Foy without mishap, though we took the precaution of tethering the youngest with a rope. She finds snowploughing too much effort and the slopes gradual enough to head straight downhill! We needed a means of slowing her speed! One of the highlights of the holiday was on our last day, when we toured the mountain.

I won’t pretend there is a massive choice of restaurants in the village. In fact, on my last holiday, my friends and I spotted what we thought was a new bar at the top of town. We took the red run down from the mid-station to cut off to it – as we each did, expertly stopping on our boards onto a bench from which we hoped to order drinks. The chalet residents playing in their garden weren’t for taking our money!!! In spite of this misunderstanding, we have enjoyed wonderful lunches in other locations up the mountain.

Our favourite spot ‘in town’ is the ‘yellow umbrella’ which overlooks the lower nursery slopes and is a good place to spend 20 Euros on a few hot chocolates whilst people watching. We’re often found in the Pitch too and get their takeaway pizza when we can’t be bothered to cook. Now the new season is fast approaching. Snow has fallen already and we are excited! I have been to Decathlon (our go to ski store of choice) and stocked up on new thermals and winter boots. We are counting down to our holiday in Sainte Foy and looking forward to enjoying the fresh mountain air, relaxing slopeside and celebrating the start of 2017.

This is a Guest Blog by our client Jennie.